However, breast cancer during pregnancy tends to be discovered at a more advanced stage. This is because it is more difficult to discover new lumps in the breasts of pregnant women as their breasts will naturally become large and lumpy during pregnancy. Lumps discovered during pregnancy should be investigated thoroughly with scans and needle biopsies in order to avoid delay in breast cancer diagnosis. Mastectomy, with the removal of the armpit lymph glands, is an acceptable treatment. Radiotherapy should be avoided during pregnancy, however chemotherapy can be safely given during second and third trimesters. Other treatments, such as chemotherapy and radiation, can be delayed until after the completion of the pregnancy.

It is safe to have pregnancy after breast cancer treatment. However, it is preferred to delay this for at least 18 months after treatment.

This rare form of breast cancer is associated with redness and swelling (oedema) of the overlying skin, and has a worse outlook than standard breast cancer. It is treated mainly with upfront chemotherapy followed by mastectomy with removal of the glands in the armpit and then radiotherapy. Skin-saving mastectomy and immediate breast reconstruction is not encouraged in such cases. However, delayeded reconstruction using body flaps can be performed 1-2 years after treatment.

This usually presents with nipple changes which including itching, redness, bleeding and discharge. There may also be an underlying breast lump or abnormality on mammogram or breast MRI. The nipple changes result from cancer cells travelling from the underlying breast along the milk ducts and to the nipple. The outlook for the disease is determined by the underlying breast cancer. If it is non-invasive (DCIS) then there is a high chance of cure by simple mastectomy. This is not essential in all cases, and some patients can be treated by removal of the nipple and underlying cancer without removing the whole breast. In such cases, post-operative radiotherapy is usually recommended. 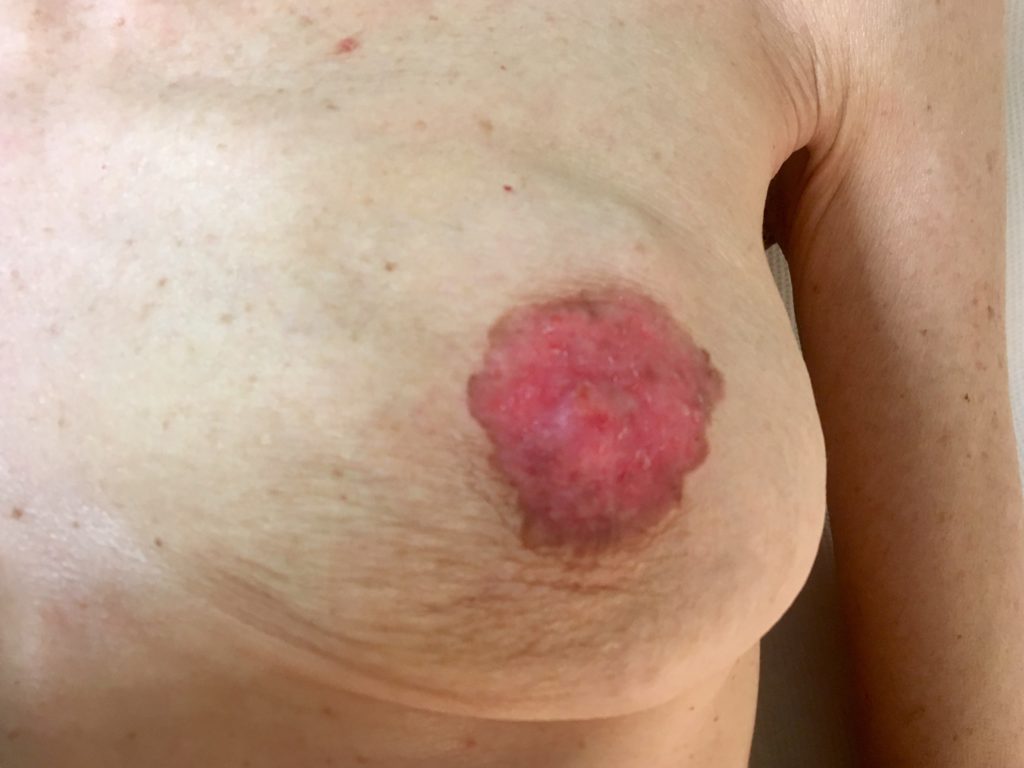